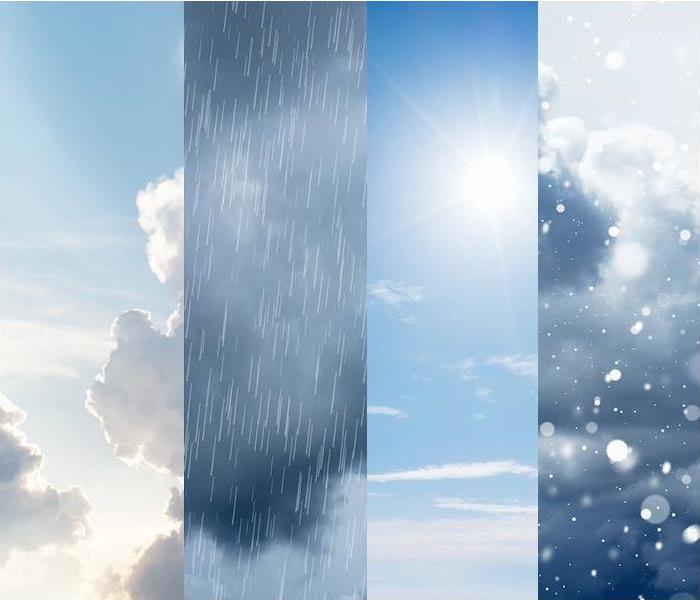 Extreme temperature changes can lead to the possibility of severe weather. SERVPRO of North Kenosha County is a click away if you experience any damag

We’re going to explore what each of the nation’s major areas, including here in Wisconsin, may expect as spring approaches and warm and cold air masses collide throughout the country.

In the spring, flooding and water damage are common in the Pacific Northwest due to heavy rains. In higher elevation areas, it may also be difficult to deal with melting and runoff from spring snowfall.

In the Upper Midwest, including here in Wisconsin, and Northeast, winters are the longest and coldest in the country (as you are surely well aware of). It can be very cold all the way into late spring and early summer for the entire region, from Maine to the Dakotas. There will be a lot of snow during the winters and as the snow melts and warm air moves through, this area can anticipate flooding, severe storms and tornadoes all through the spring. Although tornadoes are not as common in Wisconsin as in other midwestern states, they do occur occasionally, particularly during the spring and summer months.

People and property in the Southwest and southern West Coast may be at risk during this season due to extreme heat waves that often approach triple digits. Tsunamis might potentially be caused by tectonic activity in the South Pacific, including Hawaii.

Wildfires are also a concern throughout the central United States, from Iowa to Texas, where they may spread quickly when conditions are dry and windy. Tornado Alley is also located in this region, which is particularly subject to severe spring storms.

Thunderstorms and tornadoes are prevalent in the Southeast, especially inland. Additionally, the region may encounter early-season storms and hurricanes along the coast.

It’s important to be prepared for severe weather regardless of where you live, even if your risk is different than that of a friend or family in another state. Each area of the United States has its own set of extreme weather threats that pose dangers to everyone.

If extreme weather leaves you with damage from water, fire or other elements, help is a click away. Contact SERVPRO for fast, expert recovery.